Wendy Jehlen of ANIKAYA (Somerville, MA) traveled to Japan to develop a collaboration with Butoh artist and former National Theater of the Deaf actor Dakei (Tokyo, Japan). They collaborated on a new work, Delicateness in Times of Brutality, and worked toward developing a new, movement-based approach to silent theater.

This Shareback is a description of one element of my collaboration with Dakei, a Deaf Butoh artist and performer and former member of the Japanese National Theater of the Deaf.  This is the kind of work my Deaf colleagues and I are doing around the world, and is applicable cross-culturally.  The absolute most important aspect of this work is equal collaboration and/or leadership of Deaf artists.

Dakei is in the process of creating a series of workshops for Deaf-Hearing cultural exchange with support from the Art Meets Care Association. I was able to participate in one of these workshops.  In this Shareback, we would like to share the approach of this workshop.

Our longer-term project is one of direct collaboration, with a visual vernacular as a given in the collaborative relationship.  You can see the latest work-in-progress we performed in Tokyo here: https://vimeo.com/244495796

DAKEI/Shizuku
Dakei directs, performs and creates art installations. In 2000, he earned his Ph.D. degree from The National Tokyo University of Fine Arts and Music (Geidai) specializing in material studies.   He started acting in 1996 for the National Theater of Deaf of Japan.  In 1997 he was invited by Butoh dance director Kinya “ZULU” Tsuruyama to perform with his company, YAN-SHU.  He joined the company and appeared in all of YAN-SHU’s works and with this group he traveled to perform and assist workshops around the world. In 2000, he formed his own company, SHIZUKU, which debuted in Teatro Pradillo in Madrid, Spain. Since then he has been touring Europe, Asia and Latin American countries where he performs and teaches workshops. Dakei teaches Butoh in the Japan College of Social Work for a seminor specializing in teaching in sign language.

ANIKAYA/Wendy Jehlen:
ANIKAYA’s mission is to break down the perceived boundaries between people, cultures and art forms. Our work has so far extended to the US, Benin, Brazil, Burkina Faso, Canada, France, India, Italy, Japan, Mali and Turkey. ANIKAYA weaves together music, dance and storytelling to create works that pull from the full range of the body’s communicative capabilities. We incorporate traditional forms, internalizing them and then allowing them to reemerge as part of a new movement vocabulary. The result is work that is resonant of deep-rooted traditions, without being bound to any particular genre, place or practice.

The workshop:
This workshop occurs almost entirely without interpretation, so that all communication is visual, both for the Deaf participants and for Hearing participants, regardless of their knowledge of sign language. All are expected to participate visually and gesturally. 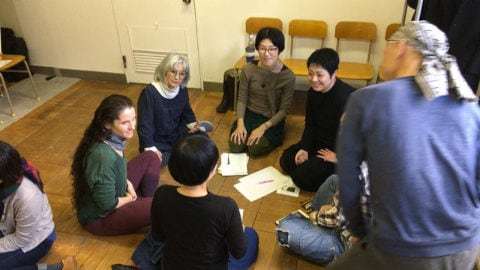 Naming:
The workshop begins with re-naming in small groups . In Deaf culture around the world, each person has a “name sign” which is usually related to a physical characteristic.  In the workshop, even those who already had name signs were given new ones by their groups.  The names were decided by consensus in the small groups. 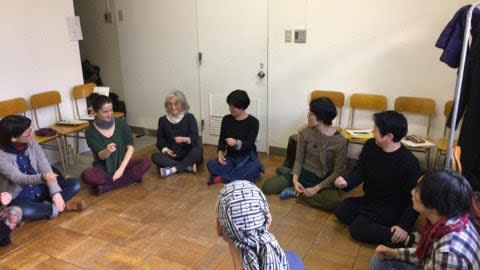 Sharing of names:
Once everyone has an agreed upon name, we make a circle and share our names in a simple name game. 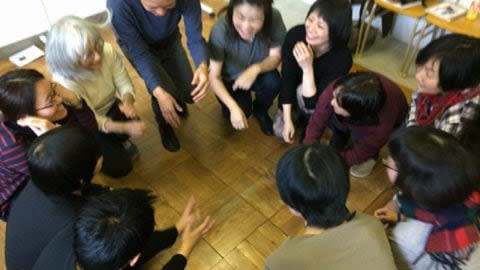 Learning where to focus the eyes:
The next game we played was explained entirely in gesture – no Japanese Sign Language, no spoken language.

Observation: This was surprisingly difficult for some participants. They would want to look around to see what was happening in the rest of the circle and would miss their cue to flip their hand, so the chain would be broken.

Why? In Hearing culture, we often don’t know where to look, where to focus our eyes in order to receive relevant information. This game teaches Hearing participants to pay attention to and react to relevant visual information. 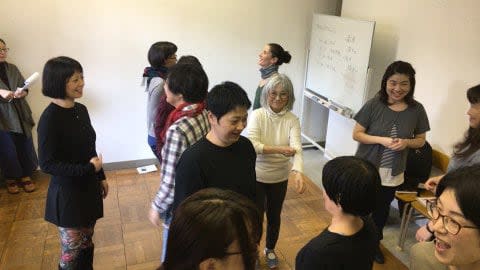 This game had two parts and is very much like many other theater games, but with a Deaf twist. 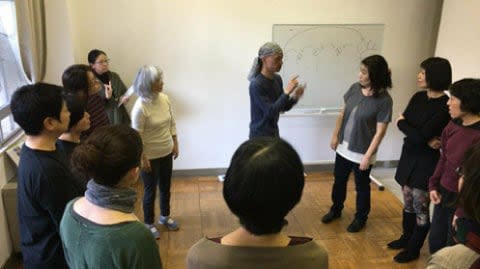 Circle story:
This game also had two stages – concrete and abstract. Both take place in a circle.

Possible next stage: the abstract exercise while milling around the space. 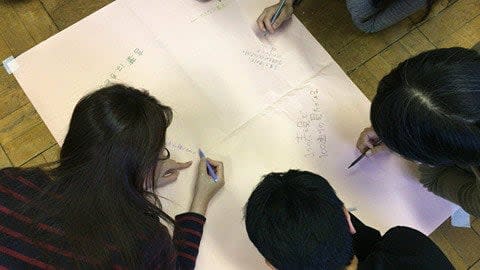 Processing:
Participants spend about 15 minutes writing and drawing their responses to the workshop, what they have learned and experienced.

This is followed by verbal sharing, with an interpreter.